Sisters who spotted a gap in the UK market for the skimpy thong bikinis that are all the rage with celebrities have set up their own brand, which is now a sellout.

It’s a far cry from their day jobs for Olivia, 25, and Charlotte Williams, 28, from London who both work as audit managers for a top six accounting firm, but they’ve managed to juggle high flying careers and setting of TOCO Swim – without taking a single day off.

But as thong bikinis exploded in popularity they discovered the only way the swimwear they liked in the UK was to pay extortionate import duties and delivery charges to order them from Australian websites.

‘We have both been working full time jobs as accountants throughout the entire process and work on this in our evenings and weekends.

‘We do daily lunch time visits to the post office to ship orders but make sure to keep both “jobs” completely separate. Some people train for marathons in their spare time, we sell bikinis,’ Charlotte told FEMAIL. 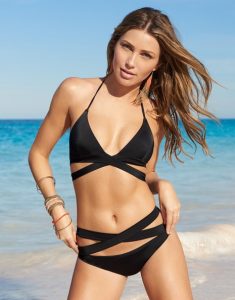